The cervix cancer is second in the list of cancers affecting women. Only in Morocco and every year, there would be around 2,000 new declared cases of cervix cancer. Before 2010, two thirds of the cervix cancers were diagnosed and treated at a very late stage in the different oncology centers. But since, a program of systematic screening has been implemented throughout the country, a program which greatly contributed in reducing the dramatic consequences often induced by a too late treatment. 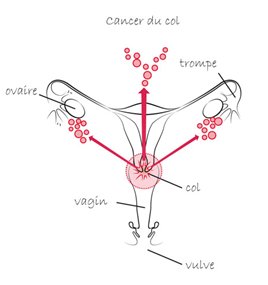 Age: the risk of developing cervix cancer increases while growing in age.

Tobacco: the smoke inhaled through cigarettes contains chemicals that jeopardize the genetic structure of the body’s cells (DNA), as these substances do damage the cells till turning them into cancerous ones.

An early sexual activity: as for the women having sexual activity too young, they increase the risk of developing a cervix cancer. It seems that the human papilloma virus (HPV) infects easier the cervical of a young woman, because the cells of her cervix are not fully formed yet. The HPV is a sexually transmitted disease.

Certain forms of HPV can cause the mutation of the cervix cells into cancer cells.

Women using condoms or diaphragms every time they have sex decrease the risk of developing a cervix cancer.

In its starting phase, the cervix cancer usually presents no sign no symptom, which explains the importance of proceeding to regular screenings of the cervical.

Once the cancer is at a more advanced stage, different forerunner symptoms can show up, such as:

 Vaginal bleeding after sex, between periods or after menopause;

 Pain while having sex;

 Pains or backache in or around the pelvis.

Cervix cancer can be prevented, as it is a sexually contagious viral infection caused by the Human Papilloma Virus. Nowadays, a vaccine is marketed, immunizing teen girls against HPV. Young girls receive a shot before any sexual activity, generally around ten or eleven years old.

Cervix cancer control and prevention are thus possible by applying:

• Primary Prevention: vaccination of the girls from 10 years old past

The therapeutic options vary according to the gravity of the anomalies discovered by the doctor.

The precancerous lesions must be treated as a top urgent matter; the therapeutic means are diverse and depend on the stage of the lesion:

Laser surgery: laser rays are concentrated on the precancerous cells.

Surgical conization: the surgeon removes a conical fragment from the cervix to eradicate the abnormal cells.

Surgery: consists in the ablation of the tumor and of the surrounding cellular tissues. The surgery can be delimited to a restricted zone in case of early diagnosis. However in general, the hysterectomy turns out to be necessary. For more advanced tumors, the doctor will have to proceed to a total hysterectomy with complete ablation of the womb, but also of a part of the vagina, the tissues surrounding the cervical as well as the lymph nodes.

Radiotherapy: the radiotherapy consists in concentrating ionizing rays on the cancer cells so as to destroy them. In certain cases, the radioactive source can be inserted inside the body, close to the tumor.

Chemotherapy: in case of cervix cancer, chemotherapy can be combined with radiotherapy, to make the treatment more effective. These medicines are administered by injection.